Established in 1998, the School of Computer Science is the largest in Israel. The school runs a prestigious B.Sc. program, well renowned for its constant adaptability for the needs of the Israeli high-tech industry and its invaluable role in bolstering the “high-tech nation”. The program combines a robust theoretical background with highly practical training in a variety of specializations recognized as the current forefront of the industry such as big data, robotics, cellular systems, cyber security, cloud computing, artificial intelligence and its applications, as well as a division in business administration. 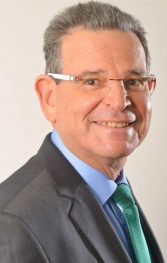 From 1983 to 1986 he was the head of the Oceanography and Underwater Acoustics Department of the Israeli Navy. He was a faculty member of the Computer Science Department of Tel Aviv University, Israel from 1986 to 1992. In 1987 he was awarded the 3 years ESHKOL scholarship by the Israeli National Council for Research and Development.  Since 1992 he has been with the College of Management where he is the founding head of the School of Computer Science Department and served as dean between 1998-2010 and took over this position again in 2019.

The School of Computer Science is committed to fostering a leading learning community in applied computer science designed to benefit the students and to contribute to the advancement of the Israeli society. In order to meet this objective, the program is built upon an up-to-date curriculum attentive to the changing needs of hi-tech industry both locally and globally; cutting edge faculty; a strong nexus to the industry and a supportive and warm environment for students, academic and administrative staff.

B.SC. IN COMPUTER SCIENCE WITH SPECIALIZATIONS IN:

The programs, offering robust theoretical study with practical training in a variety of specializations, constantly adapt their curriculum to the needs of the high-tech industry and the admission requirements for those wishing to enroll in a Master’s degree program at universities.